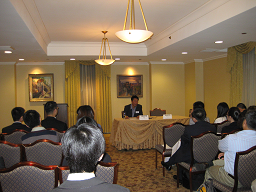 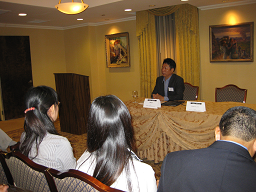 During the speech, Mr. Mu gave a brief overview of the Chinese foreign exchange administration policies and reform guidelines. In particular, he introduced the SAFE policy measurements for the gradual advancement of the RMB convertibility and the development of the Chinese foreign exchange markets. Mr. Mu emphasized that, in the wake of the global financial crisis, China must maintain the gradual pace of RMB internationalization in support of Chinese capital market and economy development as well as global trade. 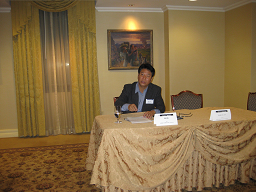 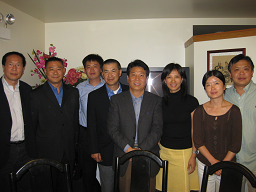 Mr. Mu also shared with the audience his general views on Chinese social and economic development. He believes that Chinese economic growth in the next decade will be powered by urbanization and domestic consumption. And as a result, there are great opportunities to be captured from the investment point of view.

Finally, Mr. Mu talked about personal and career development in China especially for the overseas Chinese professionals. Mr. Mu contrasted between specialists and generalists, and pointed out that the Chinese capital market is in need of specialists. He encouraged the audience to develop expertise and specializations with individual strength and talents.

The event was opened with the introduction by CFAA President, Ms. Vivian Lin, and followed by the Q&A session. The good attendance and positive feedback from the audience made this another successful event for CFAA.