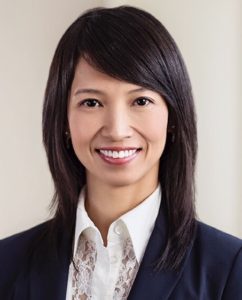 Founder and Chairman of the Board – Vivian Lin Thurston, CFA

Vivian Lin Thurston is the Founder and Chairman of the Board of Chinese Finance Association of America (CFAA). She served as CFAA President from its inception in 2009 until 2015 on a volunteer basis.

As a full-time professional, Vivian Lin Thurston is a Partner and Portfolio Manager for the China A-Shares Growth strategy at William Blair Investment Management. Previously, she was a global research analyst covering large-cap consumer stocks at the firm. Before joining William Blair, Vivian was Vice President and Consumer Sector Head at Calamos Investments. Before that, she was Executive Director and Senior Investment Analyst at UBS Global Asset Management/Brinson Partners, where she was responsible for stock selection and research for consumer sectors in the United States and Emerging Markets. Vivian also held roles at Mesirow Financial, China Agribusiness Development Trust and Investment Corporation, and Vanke previously. Vivian received a B.A. in Sociology from Peking University in Beijing, as well as an M.S. in Finance and an M.A. in Sociology from the University of Illinois. She is a CFA charter holder and a member of the CFA Institute and the CFA Society of Chicago. She is also a Director and Principal Dancer of Xilin Dance Company, a 501 (C) 3 organization, on a volunteer basis.

Hong is the President of CFAA since April 2015. Her main responsibilities at CFAA include strategic development, event organizing, and marketing. Prior to that, she was serving as the Vice President from 2013 to 2015, and Secretary of the CFAA Board from 2011 to 2013. Hong is a Associate Portfolio Manager at the Morningstar Investment Management. She manages multi-asset portfolios for Managed Portfolios, a flagship product offering of Morningstar Investment Management LLC. Before assuming this role in 2011, Hong was an Operations Associate with Morningstar Investment Services. Cheng holds a bachelor’s degree in finance and insurance from Renmin University of China and two master’s degrees in finance and computational finance, both from DePaul University. Hong is pursuing a master’s degree in business administration at the University of Chicago, Booth School of Business. She is a CFA Charterholder and member of the CFA Society of Chicago.

David is the Vice President of CFAA since April 2015 and and Treasurer since April 2013. His main responsibility at CFAA is to manage the finance of CFAA.

David is a Senior Vice President / Quantitative Analyst at Neuberger Berman’s Fixed Income division. In this role, he manages the quantitative research initiatives while also co-manages the firm’s Investment Grade index portfolios. Before joining the firm, David was a risk analyst at Fannie Mae.  Previous experience includes working as a quantitative analyst at Allstate Investments and ABN AMRO.  David earned an MBA from the University of Chicago, two other Master degrees in Economics and in Computer Science, respectively from Illinois State University, and a BA from Renmin University of China. David is currently a member of the CFA Institute and CFA Society of Chicago.

Secretary of the Board – Joyce Chen

Joyce Chen is the Secretary of CFAA since April 2013. Her main responsibilities at CFAA include membership management, event organization and management. Prior to that, she was serving CFAA as a volunteer from 2011 to 2013. Joyce is an Investment Analyst with Morningstar Investment Management, working on manager selection efforts in the area of fiduciary services. She has been with Morningstar since 2012. Joyce received her Bachelor of Science degree in Economics from Beijing Normal University in China and a Master of Science degree in Finance (with distinction) from DePaul University.

Rex Hong is the Director of CFAA since 2013. Prior to that, he was the Vice President and founding member of the organization.

As a full-time professional, Rex is the Senior Vice President, Manager of China Business Relationship, of Cathay Bank. Rex coordinates all China-related initiatives within the bank and works closely with the Chinese corporates, investors and high-net-worth clients to facilitate their financial needs in the United States.

Before joining Cathay Bank, Rex was the Co-Managing Director of the Asia Division of PFGBEST, which was one of the largest non-clearing U.S. Futures Commission Merchants and FX Brokerage firms. Rex launched the company’s Shanghai Representative Office in 2007; he was also instrumental in the establishment of BESTDirect Australia Pty Ltd in June 2012, and was licensed by the Australian Security and Investment Commission (ASIC) as Responsible Manager.

Summer Liu became a Director of CFAA in April 2015. Prior to that, she was a member of Communication Committee in CFAA since 2014. Summer is a portfolio accountant and trading specialist in BridgePortfolio Inc. She supports the daily portfolio reconciliation and assists the requests from RIAs with resolutions of performance discrepancy, rebalancing and account maintenance. Prior to this, Summer received her Master’s degree in finance from DePaul University in 2013 and her Bachelors from Shanghai University of Finance & Economics in 2011.

Mr. Ray Chan is currently a Partner at Shanghai Lee, Tsai & Partners Attorneys-at-Law. He has more than 10 years experience in China legal industry and practises law in the areas of foreign direct investments (FDI), intellectual property, M&A, general corporation affair and litigation. Ray received his Master of Laws (LLM) degree from Chicago-Kent College of Law, Illinois Institute of Technology, another Master of Laws degree from East China University of Political Science and Law, and his Bachelor’s degree in Mechanical Engineering from Huazhong University of Science of Technology.

Jeff Lu received his MBA degree in Finance from Yale School of Management, and Master of Science and Master of Philosophy degree in Cell Biology from Yale School of Medicine. Mr. Lu has worked as a research analyst and portfolio manager with Franklin Investments, AIG and China Asset Management, each managing multi-billion dollar assets for retail and institutional clients.  Using the method of evidence-based scientific research, Jeff conducted his search for investment ideas in a similar fashion.  Once an experienced biotech and pharmaceutical industry analyst, Jeff has developed his skill and knowledge in investing in energy, material, industrial and technology sectors. He traveled to Russia, Brazil, Turkey, Kuwait, Chile, UAE, Canada, Australia, US, Britain, France, Belgium, Swiss to visit companies and meet with management.  He successfully managed global equity portfolio for clients that significantly outperformed corresponding benchmark in recent years.  He authored the book The Wall Street Missed.